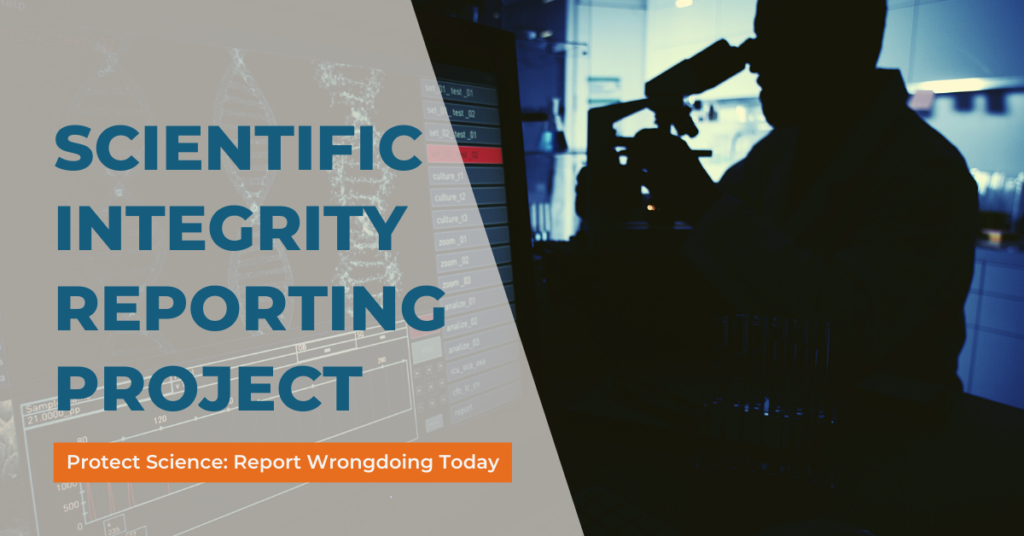 Our parent organization Government Accountability Project is teaming up with the Climate Science Legal Defense Fund (CSLDF) and several other organizations to launch the Scientific Integrity Reporting Project, an initiative to learn more about the exact nature and frequency of inappropriate interference in government. Scientists in agencies and departments across the federal government are encouraged to report instances of specific threats to scientific integrity they have witnessed to us by using a secure online survey form with strict assurances of privacy and confidentiality. The information and insights we gather will be used to inform policymakers in the White House and in Congress as they amend official scientific integrity policies first required under the Obama administration, which are now being strengthened under the Biden administration.

Our other partners include the American Geophysical Union (AGU), the Environmental Data and Governance Initiative (EDGI), the Jacobs Institute of Women’s Health, and Union of Concerned Scientists (UCS). All of these groups have shown fierce dedication to preserving and protecting scientific integrity in government.

“For decades we have supported employees of conscience who defended scientific integrity by speaking up, often at great professional risk, about problems ranging from suppression of information about unsafe nuclear projects to censorship of climate science reports to, most recently, the purveying of bogus, dangerous information about COVID-19 treatments just this past year. We know that reports from employees about violations of scientific integrity can truly make a difference in not only addressing the problems they disclose but strengthening the rights of others to stand up for science in the future. This project will allow federal employees, grantees and contractors to similarly share their stories but in a way that is safe and confidential, in chorus with others who understand that scientific integrity is essential to the public policies and practices that affect all of us.”

While politically motivated attacks on science and federal scientists are not new by any stretch, assaults on taxpayer-funded science escalated to troubling levels throughout the Trump administration. Under President Trump we saw continual anti-science rhetoric from the White House (especially as it relates to the twin existential threats of climate change and COVID-19) and patent denial of scientific fact by the president. We even witnessed POTUS taking a Sharpie to a National Weather Service map on national television to redraw the predicted path of a major hurricane to his liking.

Widespread instances of censorship, gag orders, suppression of free speech, budget slashing, attempts to tamper with the language of peer-reviewed scientific conclusions, and employee transfers designed to kill off climate change and other science programs unpopular in the White House have collectively taken a toll on US-sponsored scientific research, which has typically been the envy of the world. We are still assessing the damage. For example, the sustained hostility offended hordes of scientists who had dedicated their careers to public service and led to a mass exodus of PhDs causing a national “brain drain” that will be difficult to restore. Key science programs across the board were brought to their knees or even killed off completely via draconian budget slashing, and mass employee transfers.

Evidence-based policymaking is the cornerstone of responsible governance, and sound science produces sound evidence. Scientific integrity can be defined as abidance by a set of rules that govern experimentation and scientific research in such a way as to ensure honesty and scientific rigor. Dishonesty, fudging the numbers, and putting a political spin on science does not lead to truth – quite the opposite. Fiction-based policies are dangerous for everyone, as we saw play out when President Trump downplayed the risk of exposure to COVID-19 and advocated bleach ingestion as a preventive measure, and when he dismissed climate change as a major factor in causing devastating California wildfires and admonished the US Forest Service for failing to adequately sweep forest floors. When it comes to saving lives, the truth matters.

Our initiative is aimed at documenting past and ongoing threats to scientific integrity to ensure that science can contribute to evidence-based policymaking without the influence of partisan politics, pure and simple. We’re asking government scientists to offer their narratives describing the details of just how their projects and programs have been compromised or continue to be compromised, and perhaps how they themselves became the target of anti-science attacks and suffered retaliatory measures simply for doing their jobs. We’re also offering free legal counsel to any government scientist who believes they may have an actionable complaint under federal whistleblower protection provisions. The information to be gleaned from this endeavor will be invaluable in strengthening scientific integrity policies across the federal government so that those wishing to interfere in the scientific process for their own political or personal gain will think twice.

CSPW’s Senior Scientist & Climate Policy Analyst Anne Polansky has over 30 years of experience in public policies relating to energy and the environment, with a strong focus on climate change and renewable energy. She is a former Professional Staff Member of the House Committee on Science, Space and Technology.