The countless acts of violence against Black Americans at the hands of police officers have laid bare incontrovertible, and intolerable, systemic racism in law enforcement. Government Accountability Project stands with all those demanding accountability and institutional change to prevent continuing abuse and injustice against Black, Indigenous, and People of Color (BIPOC).

Government Accountability Project supports the tireless efforts of organizations calling for reform of policing and an end to systemic racism, including but not limited to the:

We stand with each organization in their fight for law enforcement accountability and racial justice, and we pledge to use our platform to elevate their messages to help fight for overdue change.

Further, Government Accountability Project supports brave protesters who organize and march peacefully in support of racial justice despite escalating threats of arrest and violence. This includes increasingly militarized responses by the federal government seeking to suppress citizens from exercising their constitutional rights. We condemn the targeting of journalists covering the protests, and above all, we stand in solidarity with communities who experience systemic racism in our country.

As a public interest organization dedicated to promoting government and corporate accountability in the service of justice, we pledge to continue to support organizations working for these ends. To that end, we can and will contribute our unique expertise in whistleblowing to this cause.

Our Call for Law Enforcement Accountability

Whistleblowers — employees who witness and choose to speak up about serious misconduct, corruption, illegality, public health and safety threats, and other abuses of power — are powerful catalysts for accountability. This is true across every issue, including abuses by law enforcement.

Police officers are uniquely positioned to expose the systemic and individual abuses of power and misconduct that have plagued communities of color. Yet police whistleblowers who promote accountability consistently confront the “Blue Wall of Silence,” a powerful cultural phenomenon that infests law enforcement environments and significantly chills disclosures related to misconduct and abuse of power. Police officers have lost their jobs, and even their lives, after deciding the blow the whistle on racism in the police force. Thus, policing systems must work to dismantle barriers to reporting. Any reforms aimed at preventing and addressing police misconduct must include effective mechanisms that both facilitate whistleblower disclosures and offer robust protections from retaliation to the brave ethical officers who come forward. By dismantling the “Blue Wall of Silence,” police whistleblowers can promote cultures of accountability and continuous improvement within their departments, and BIPOC communities can be protected by, rather than need protection from, those charged with serving the public.

Previously included in 60 federal remedial laws, whistleblower rights are crucial to ensure proposals work as intended. Technology, such as video footage of police officers, is an important first step. But witness testimony from fellow officers would ensure that accountability-free abuses of power are not another way of life in police departments. This testimony comes when law enforcement whistleblowers enjoy best practice anti-retaliation protections.

Congressionally enacted whistleblower protections for law enforcement officers, be they stand-alone anti-retaliation laws or those included in police reform legislation, would create an important enforcement mechanism for exposing misconduct and promoting accountability. Indeed, they will help dismantle the “Blue Wall of Silence” by not only overtly expressing the value of police whistleblowing, but by practically reducing the risk law enforcement officers face to their careers, safety, or lives when they choose to blow the whistle on misconduct or abuse. In turn, the testimony of police whistleblowers could increase support for significant safeguards such as the ban on chokeholds, oversight of mandatory body cameras, restrictions on no-knock warrants, and controls on the transfer of military equipment to state and local police.

We recognize that whistleblower protections for law enforcement officers to report misconduct are only one piece of the reform movement needed to address systemic racism and corruption. But it is an important piece that can help expose, address, and prevent abuses by police that not only harm People of Color but also threaten democracy itself.

Government Accountability Project sent two letters to Congress about the need to strengthen police accountability whistleblower protections, one signed by advocacy organizations and one signed by law enforcement officers. Read them below.

How to Report Law Enforcement Wrongdoing

We offer support and advice to employees who have witnessed police or law enforcement wrongdoing or abuses in the workplace.

If you have any questions about our intake process or who we can help, check out our Frequently Asked Questions page.

If you need help blowing the whistle, fill out our in-take form today.

Strong Whistleblower Protections Must Be Included in the George Floyd Policing Act This article features Government Accountability Project and was originally published here. As the country reflects on the one year anniversary of George Floyd’s murder by a Minneapolis police officer, we mourn his loss as we also mourn the lack of real progress on police reform. Politico reported that fatal encounters with police in the first 4 months of 2021 are on par with last year’s daily average [...]

Advocacy Organizations, Law Enforcement Officers Urge Congress to Include Increased Whistleblower Protections for Police in Reform Bills This article features our Legal Director Tom Devine and was originally published here. On May 18, Whistleblower Network News, along with 170 advocacy organizations, signed a letter urging Congress to include “best practice anti-retaliation rights” for law enforcement whistleblowers in upcoming police reform legislation. The letter points to the fact that over 60 federal remedial laws include whistleblower protection because [...]

Reporter Newspapers: Two Dunwoody officers among many calling for accountability and police reform

Two Dunwoody officers among many calling for accountability and police reform This article features Government Accountability Project and originally appeared here.  Law enforcement officials across the country, including two Dunwoody officers, are calling for congressional leaders to hold police departments accountable. DPD civilian Prisoner Transport Officer Brian Bolden and former DPD Officer Austin Handle signed a letter that was sent to Speaker of the House Nancy Pelosi, Minority Leader Mitch McConnell, and others on May [...]

Through resources and trainings, we educate employees, journalists, civil society organizations, professional associations, unions, and others about the essential role whistleblowers play in promoting accountability and protecting fundamental public interest values, as well as how ethical employees can disclose wrongdoing effectively while minimizing the risk of retaliation.

None of these resources are a replacement for legal counsel. We strongly encourage all employees to speak with an experienced attorney before raising concerns about serious misconduct, corruption, or abuse since whistleblower law is a complicated patchwork of protections that are difficult to navigate.

Some good places to start:

Working with Whistleblowers: A Guide for Public Interest Organizations 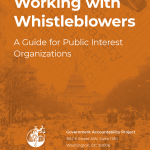 This resource was developed to support advocacy groups that, in the course of working on issues across the social, racial, economic, and environmental justice spectrums, might encounter employees who want to share important information to advance accountability. The free guide offers practical guidance to help them protect and support potential whistleblowers while ensuring they are not inadvertently exposed to retaliation.

Working with Whistleblowers: A Guide for Journalists 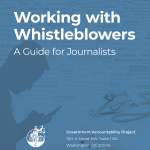 The partnership between whistleblowers and journalists is essential to a functioning democracy. The power of whistleblowers to hold institutions and leaders accountable often depends on the critical work of journalists who verify whistleblowers’ disclosures and bring them to the public. This free guide seeks to empower and protect journalists and their whistleblower sources by sharing critical information about their shared goals, responsibilities, and challenges.

Truth-Telling in Government: A Guide to Whistleblowing for Federal Employees, Contractors, & Grantees 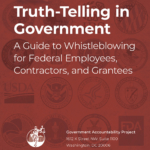 Government Accountability Project’s newest resource seeks to help federal government employees, contractors, and grantees–across all agencies and issues—who have discovered serious abuses of public trust and need guidance about their rights, risks and options. Whether you have yet to raise concerns or have already made disclosures, this guide is the first step for  navigating the complex path of whistleblowing safely and effectively.

Caught Between Conscience and Career: Expose Abuse Without Exposing Your Identity

Published by Government Accountability Project in partnership with Public Employees for Environmental Responsibility and the Project On Government Oversight, Caught Between Conscience and Career is a free survival guide for public employees considering blowing the whistle on waste, fraud, or abuse while maintaining anonymity. Whistleblowers can look to this guide for tips on how to avoid surveillance and make their protected disclosures have greater impact without incurring reprisal. Caught Between Conscience and Career is an updated April 2019 version of the 2002 publication, Art of Anonymous Activism.

For more information about blowing the whistle safely and effectively, visit https://whistleblower.org/resources/.